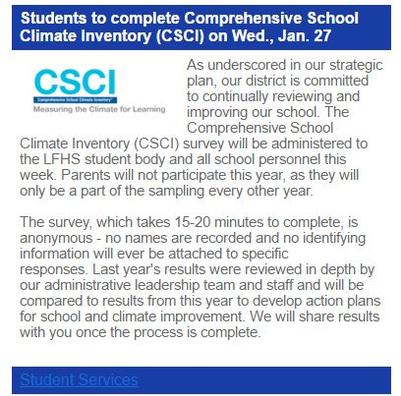 Discourse is invited on issues relevant to LFHS, District #67 and Education in general.  The written submissions will be assembled from sources believed to be reliable, but this reliability is not guaranteed.

Neither LFSW nor its supporters specifically endorse any analyses presented here.  LFSW and its supporters only endorse the general notion that the exposition of  well-researched and factually supported submissions serves to increase  the community's knowledge and/or stimulate important dialogue on relevant issues.  LFSW welcomes insight from community members committed to either the LFSW mission or to maintainng the status quo, believing, with Shakespeare that "truth will out."

LFHS pays private, out-of-state “Special Ed” boarding school tuition, room & board--
Documents released pursuant to a FOIA request and our own independent research reveals District 115 spent over $1 million for 2014-2015 and is on track to pay over $1 million in 2015-2016 for private facility, Special Ed payments.  Out-of-state room, board and tuition payments comprise the lion’s share of these private provider disbursements. Read more here.

​Chump Change-- Why is LFHS paying 56% more for its Communications Director than neighboring school districts pay?--

​Over the transom came an Anonymous Document which, coupled with D67 and D115 publicly available documents, suggests the part-time D67 and part-time D115 Director of Communications earns substantially higher (56% higher) than her contemporaries.  Read more here.

​​Is your child doomed to remain just an “extra” in someone else’s made-for-TV-movie?--
http://www.wciu.com/videos/youandme/principal-chala-holland-s-inspirational-story

neither wanted nor necessary for this

Despite substantial and ongoing parental

concern regarding a myriad of issues,  parents--

fully 33.3% of LFHS stakeholders, will not

be surveyed this year. Yet the results will be

made public later and "reviewed in depth"

and used to "develop action plans for school

or just disdainful of it?

Warning to teachers and students who

complete the survey:  Do not do so

from your Chromebook or personal

computer. Use an anonymous IP address.

Last year's Comprehensive School Climate Inventory completed by students, staff and parents saw 59% of LFHS staff completing the survey give its "leadership" a negative (25%)  or neutral (34%) rating.  This year, parents won't be able to weigh in on the issues at all as Superintendent Simeck announced their input will not be sought.  Read more here.

(Why does Superintendent Simeck want to sign a contract with ECRA Group when ECRA would charge LFHS $250 per hour for extras (but only charges Niles Community High School $700 per day?)

​Is the District Entering Into an Illegal Contract?--January 10,2016

​I am concerned that the above-referenced Agreement the Board is about to enter at its January 11, 2016 meeting at the behest of the D115 Administration does not protect students against disclosure of their personally identifying data to third-parties and may in other respects possibly violate of federal and other law.  In addition, I am concerned that parents have had insufficient opportunity to evaluate whether the disclosure of any or all of their child’s personal information to a third party is even necessary to achieve the ambiguously stated aim of the Agreement. Read more here or at Daily North Shore here.

Is District 115 planning on retiring all Native American motifs and logos at LFHS?  Read more here.

Upcoming “Lunch and Learn” with Chala Holland at LF’s First Presbyterian Church--October 23, 2015
“Lunch and Learn”, a program sponsored by the First Presbyterian Church of Lake Forest is hosting LFHS principal Chala Holland on October 23, 2015 at noon.  It’s unknown whether both adults and children, or children only will be allowed to participate and “suppress her narrative”. Read more here.

Holland asks reporter to "not revisit the conflict that surrounded her" then asserts her "narrative has been suppressed",   leaving parents still in the dark on her offensive internet comments and their scrubbing, October 2015.

In an interview in the October 2015 Forest & Bluff Magazine, p. 60.  and Daily North Shore, Chala Holland appears to refer to her online media comments and their scrubbing thus:  "Unfortunately, a different narrative has been created that's not mine.  Based on everything that's happened, my narrative has been suppressed.."  She does not identify what force has "suppressed" her ability to openly and forthrightly produce her own "narrative"--indeed, when given ample opportunity to give her side, she refuses.  LFHS stakeholders remain the victims of her suppression, not the other way around.    See also, the Tribune story below.

In a Chicago Tribune Article, she states (with regard to the scrubbing of her internet presence):

"I am aware that a narrative has been created about my website coming down, although that decision has had nothing to do with the way it has been framed," e-mailed Holland, who did not return follow-up calls seeking comment about the post specifically or whether she believed the criticisms of her to be related to her opinions about race."  Read more here.

​"Did you know, for example, that foreign applicants to American business schools (particularly applicants from India and China) are doing much better on the quantitative portion of the GMAT than their American counterparts? And as a result, some business school admissions offices have decided to compare American applicants only with other Americans because the Americans don’t stand a chance against their international competitors?"  Read more here.

Restore the Caucus (www.restorethecaucus.com) has posted Lake Forest Caucus Committee minutes from 2012  (Scroll down to see the article titled:  Best Practices:  Avoiding “Farce” if Possible).
It appears that back in 2012, the then newly hired LF Schools Superintendent Simeck was allowed to address the Caucus Committee at an August meeting and tell them the type of school board members he wanted.

In other words, that Caucus Committee let him help hire his own bosses.  READ MORE HERE.

​From a long-time Lake Forest Resident and Concerned Citizen, August 28, 2015--

"Now that school rankings have been published, it is useful to look at where LFHS stands within the state of IL rankings. (http://www.usnews.com/education/best-high-schools/illinois). . ."  READ MORE HERE.

"I'd like to see a freeze in administrative staffing and salaries until the total budget is brought down to a reasonable level, devoting some of the saved money to rewarding the excellent teachers who are worth so much more than even the lofty salaries they are already being paid. Aside for fiscal monitoring, an inspector general should be charged with monitoring whether our administration is fostering their own political agendas or acting solely in the interests of the children."  Read more here.

From Nancy Thorner, Lake Bluff,  to Alan Albus, LFHS FOIA Officer, July 30, 2015
"I am extremely disappointed that District 115 is, once again, hiding behind Illinois FOIA exceptions to deny the public documents that are clearly subject to disclosure under the Act.  Your attempt to sweep important public issues under the rug by hoping that residents will give up on their legitimate requests through wearing them down with frivolous denials requiring appeals which, if they are ever addressed, take months or years to resolve until which time the issues have become stale.
I still have appeals pending of documents denied regarding the 2011 Steinert scandal, allowing Griffith to retire without the public scrutiny he was due concerning his role in the cover-up of that scandal.  I also still have an appeal pending from post-union negotiations in October of 2012 when the district refused to produce documents I requested, including production of any "strike plan" the District had in effect. The failure of the District to respond and the appeal to be resolved allowed yet another set of negotiations to come and go without public scrutiny of the prior one." (Emphasis supplied.  Read more here.)

"I am asking the Board directly:
Can you explicitly and precisely describe your views and goals regarding the teaching of racial issues in our schools?
Will you be hiring any consultants such as the PEG group or any group associated with them?
Will you be monitoring Principal Holland’s new hires to make sure they do not bring her radical racial views into the school?"

Read more of his email to LFSW and questions he'd like to ask the Board here.